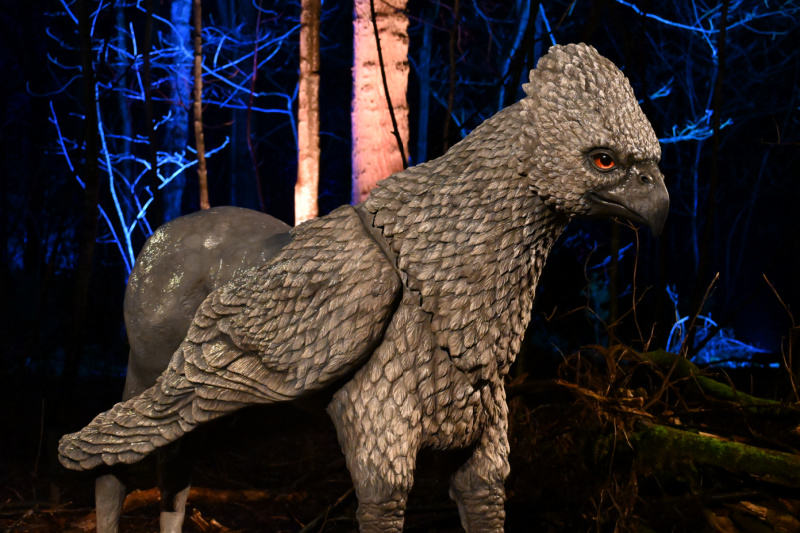 Regular readers of my blog will know that we are Harry Potter mad in our family and have recently visited Warner Bros Studio Tour and the Harry Potter Photography Exhibition, so when I saw that they were recreating the Forbidden Forest in an actual forest, I knew that we had to visit.

Harry Potter: A Forbidden Forest Experience is a nighttime woodland trail experience set in the grounds of Arley Hall, filled with magical creatures and wizarding wonders from the Harry Potter and Fantastic Beasts films.

As it is outside, you are at the mercy of the elements and we saw hail, sleet and rain during our visit, but thankfully the trees provided some shelter. I strongly recommend that you wear sturdy walking shoes or wellies, as the site is very muddy in places.

When you book your experience, you are allocated an entry time, which helps stagger the entry, however once you are in, you can take as much time as you need to enjoy the forest. You start with a staff member using a Deluminator to borrow the candles’ flames and then cast the Lumos charm to switch on the lights to lead the way. As you follow the path, you can hear the chatter of the characterswhich really set the tone for the whole evening.

There’s plenty of magical creatures to look at along the way and our first spot was Hagrid and his dog Fang, set amongst the trees which were lit up with atmospheric lights.

To really bring the forest to life, some of the creatures appeared on translucent screens, others were models like a bowing Buckbeak and Hagrid’s half-brother Grawp the giant and some were imagined by lit eyes peering out of the darkness with sound effects, like the wolves and the explosive skrewts.

I highly recommend you walk at a slow pace so you spot everything there is to see. We saw Harry Potter’s snowy owl Hedwig and his friends roosting high up in the trees.

At the halfway point, there is a fun photo opportunity, where you get to recreate the Harry and Voldemort battle from the Goblet of Fire, as well as the chance to stop and take a break and warm up with some refreshments.

Our favourite part of the evening, by far, was the chance to cast our very own Patronus charm, which flashed up on a screen as we waved our wand and said the spell “Expecto Patronum”. We all got a different patronus, which made it all the more believable.

The second half of the Forbidden Forest had more characters from Fantastic Beasts, including Bowtruckles and Cornish Pixies in the trees, Pygmy Puffs and a den of Nifflers with their loot.

There were also more special effects, such as Ron and Harry flying the famous Ford Anglia through the trees and subsequently crashing it into the Whomping Willow.

As you get deeper into the forest, it does get darker, both in light and in tone, with symbols lit up on trees, such as the deathly hallows, house emblems and the dark mark, plus cobwebs belonging to Aragog and his family.

Sebby doesn’t like Aragog at WB Studio Tour, but although you can bypass this section if you want, he bravely entered Aragog’s layer.

We warned him that spiders would be lowered from the sound stage and he was OK at first. They lowered them once, then again and then a third time, which we were not expecting and they were scarily close!

The finale of the experience is the arrival of the dementors over the lake and then Harry casting his infamous stag patronus. Again, it was brilliantly done, all using a giant screen, smoke and lights.

You exit the forest into the Harry Potter village, with an assortment of refreshments on offer as well as a gift shop. Like the rest of the evening, it was all brilliantly done and felt like you were visiting Hogsmeade. There was butter beer on offer, as well as toasting marshmallows and hot food.

Harry Potter: A Forbidden Forest Experience is open until 16th January 2022 and costs from £24 per person, depending on the time you visit. We went late (9.40pm) as it was slightly cheaper and much quieter than it is earlier in the day.

It is a brilliant evening out and well worth the journey from Dorset to see it. We stayed at Hyatt House Manchester, which is approximately a 20 minute drive from Arley Hall, depending on your time of travel.