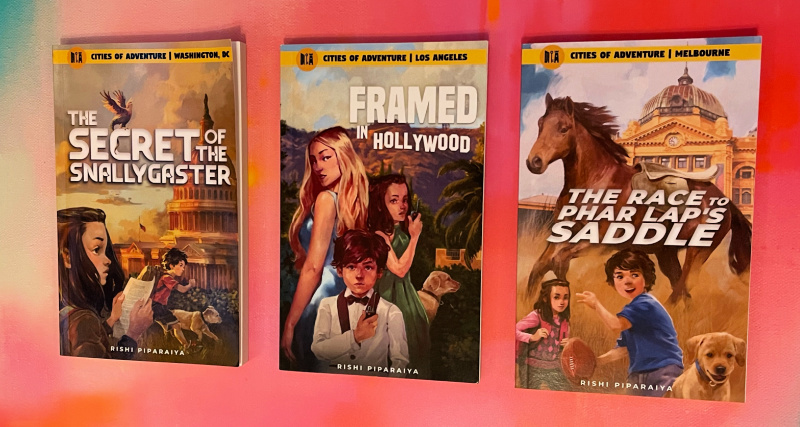 One thing we have really missed over the last 18 months is travel.

We were invited to review the Cities of Adventure travel books for kids, which promise to whisk them away to faraway lands.

Cities of Adventure are ‘travel guides’ that children can read before visiting any major city–as adults might do–but with a twist! Rather than sharing drab facts, each book is written as an action-packed adventure story that incorporates the spirit of the city, and its main attractions and experiences.

We were sent three books from the series:

Neil and Tara have prepared themselves for a few days of extreme boredom. After all, that’s what comes with accompanying their parents on a busy work trip, even to an exciting city like Melbourne.

But when a precious artefact is stolen from the museum where their father is working, the two find themselves in the middle of a whirlwind adventure that takes them all over the iconic Australian city. Racing against time, they learn about Melbourne and its legends, solving one cryptic clue after another. But can Tara and Neil find the artefact and save the day? Or has it been lost forever, destroying a lot of dreams along with it?

The Secret of the Snallygaster: Washington, DC, USA

Tara and Neil are looking forward to spending a few days exploring the sights of Washington, DC, with their parents. But when a long-hidden family secret is discovered, their fun family trip turns into a frantic race against time to save a mysterious—and magical creature: the snallygaster. Soon the Landers find themselves following clues and solving puzzles that take them through the city’s museums, memorials, and monuments. Can they follow the trail to the end before they run out of time? Will they be able to save their mysterious new friend? Or is the snallygaster doomed?

The Landers are star struck! After unexpectedly meeting leading Hollywood actress Sally Sinclair, the family finds itself invited to the filming of her latest movie. To their shock, however, the film scene soon becomes a crime scene. Even worse, Sally is the prime suspect!

The Landers are sure Sally is innocent, but can they prove it? Soon, the family finds itself chasing clues around Tinseltown’s most famous attractions, trying to catch the real culprit. Along the way, they encounter a suspicious cast of characters, including a self-absorbed heartthrob, a quick-tempered director, a confused cameraman, a prolific writer, and more. Will an innocent person remain framed? Or will the Landers solve the case before the film runs out?

These books are right up Eliza’s street as she loved History and reading. All feature local history, adventure maps and fun facts about the city where the book is based, as well as whisking the reader off on a fun adventure.

If you are travelling abroad with kids soon, these are the perfect books to whet their appetite. Nothing beats visiting somewhere that you have seen on TV / film or read about in a book.

There are currently four books in the series, taking you to the cities of Washington DC, Los Angeles, Melbourne and New York, all available from amazon.

Just wish we were visiting these locations soon!!