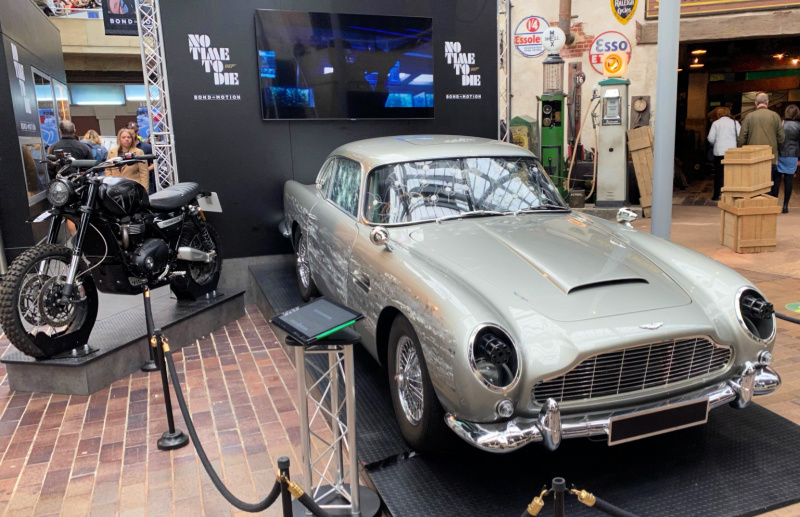 This week we were invited to one of our favourite local days out, the National Motor Museum at Beaulieu, to see their brand new Bond in Motion – No Time To Die Exhibition.

The exhibition is set in the main Motor Museum on the ground floor and features iconic cars, gadgets and costumes from the latest 007 film.

The exhibition, which is running until November 2022, offers the first opportunity to to see many of the original vehicles, gadgets and costumes from No Time to Die against the backdrop of large screens showing action shots from the recently released film.

The boys were most excited to see the machine guns in the headlights and where the cars featured in the film, up on the big screens behind the cars.

Four-wheel drive enthusiasts will enjoy Bond’s Land Rover Series III and the Land Rover Defender 110 which are on display with a Triumph Scrambler motorcycle and a Royal Alloy Scooter.

Also on display is the Aston Martin DBS Superleggara, driven in the film by new agent Nomi, the No Time to Die Aston Martin V8, which was last seen in The Living Daylights and the Chevy Bel Air.

There are also costumes and accessories on display, plus electronic tablets with information about the exhibits from the 25th Bond film.

On top of the Bond in Motion exhibition, the National Motor Museum contains over 280 cars, including the World of Top Gear and On Screen cars.

Beaulieu isn’t just cars though and there is plenty of activities on offer to keep the whole family occupied.

You can walk in the footsteps of the Monk’s at Beaulieu Abbey, discover life upstairs and downstairs in Palace House, find out about the special agents in the Secret Army exhibition and explore the beautiful grounds and gardens.

For the kids, Little Beaulieu is a place where they can let off steam as they explore the magical wooden palace, filled to the brim with secret passageways, hidden tunnels and lookout towers.

Or find the fairy doors and sculptures on the woodland walk.

A family ticket to Beaulieu costs £59 if you book online in advance and includes entrance to all the attractions on offer.

Have you visited Beaulieu before?

Disclaimer: We were guests of Beaulieu for the purpose of a review. All thoughts and opinions are our own

2 thoughts on “Review: Bond in Motion – No Time To Die Exhibition”