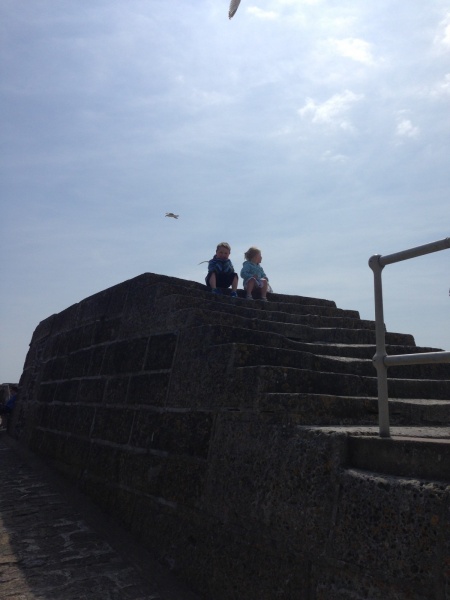 This weekend is the last one we have with hubby before he goes back to work, so we thought we would make the best of it and celebrate everything Dorset has to offer.

We love exploring our County but there is one seaside town that I have been desperate to visit for some time – Lyme Regis, so it seemed like the perfect opportunity to plan our visit when we found out it was its annual Fossil Festival this weekend.

We packed the kids in the car early, expecting the roads to be busy.  We were pleasantly surprised and encountered not one queue on our journey.  Having not been to Lyme Regis before we didn’t know where we could park, but everything was clearly signposted and we parked with ease.  Paying for parking was a little more challenging though as hubby and I both though we had change, we hadn’t, and we had no phone signal to pay by phone.  A bit of phone waving in the air around the car park finally worked as we found that one hotspot of signal and then we set off for the beach. 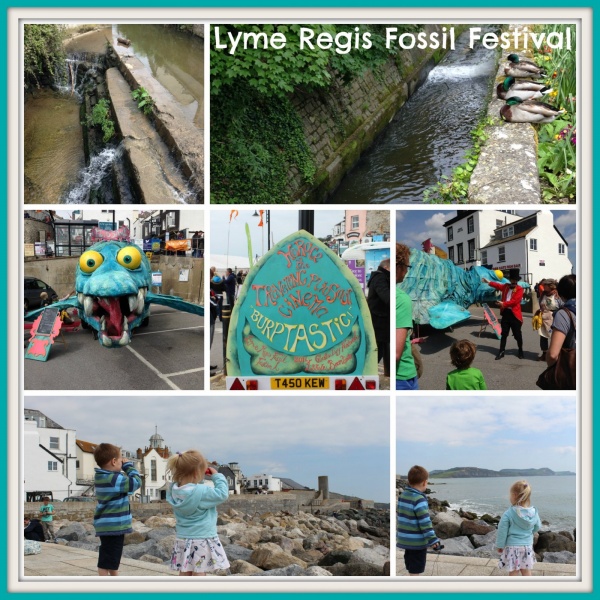 The walk down to the beach was steep and a little hair raising at one point as there was no barriers next to a small waterway.  There was no doubt that Lyme Regis is quite simply a stunning seaside town though.

We spotted Horace the Pliosaur – a 35-foot Jurassic sea-lizard with a walk-in cinematic belly.  Horace is an outdoor theatrical installation, accompanied by ‘palaeo-mechanic’ showman Dr Davidson and his dotty groom Jo.  I picked up some free tickets for the kids for one of the shows as the kids took in their surroundings.

The Fossil Festival itself was set in a huge Marquee on the beach and the kids made a beeline for a Moroccan Fossil Kit, where they got to identify fossils and make their own displays to take home. 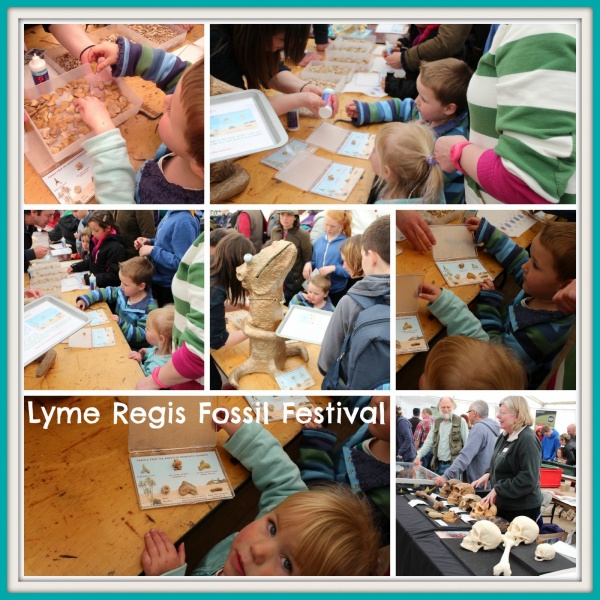 There is something for all ages – we looked for fossils hidden in sand, tiny fossils under the microscope, held a piece of the moon, made a volcano erupt and even took part in a CSI type reconstruction to see who or what had committed a very serious crime. 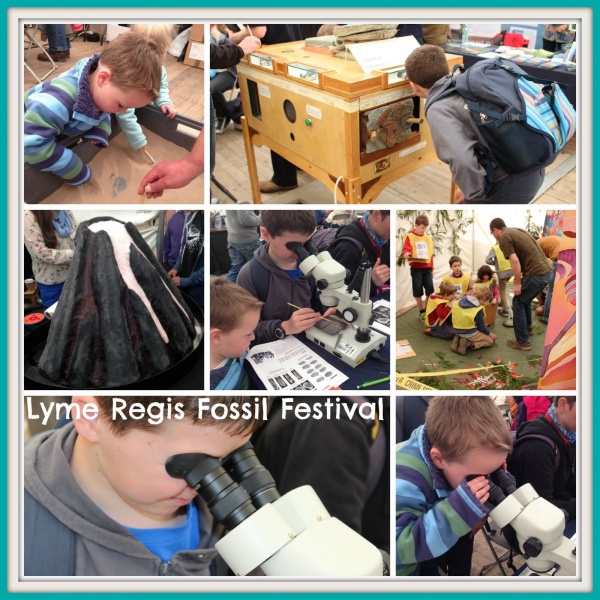 Almost all of the activities were free and staffed by friendly and knowledgable teams who were more than happy to answer the barrage of questions coming their way.  The kids even got to take part in a spot of crafting too. 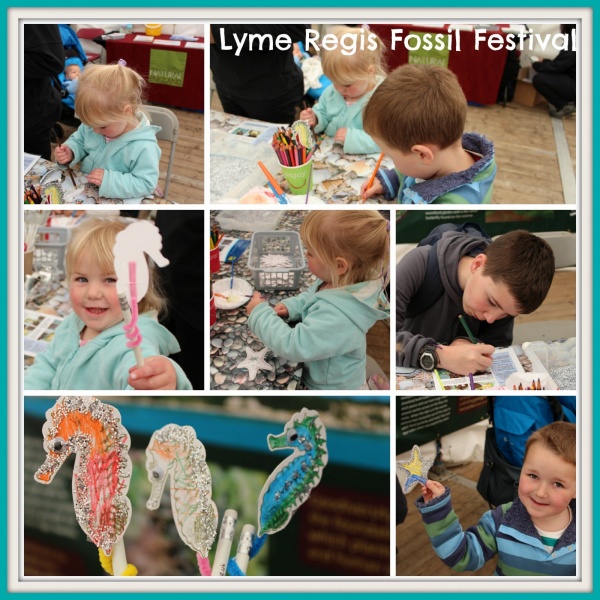 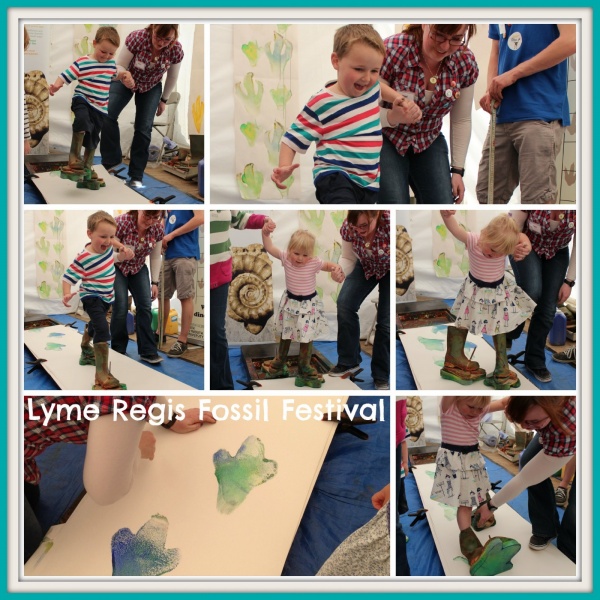 By now the kids were starting to get hungry so we headed outside for a spot of lunch before exploring the beach and Cobb.  I had been surprised that the Lyme Regis beach was shingle, but in fact they have both!

We walked up to the Cobb to see where the famous pictures had been taken during the storms over the winter.  Hubby and Kian walked over the top of it, whilst I stayed behind with the little ones. 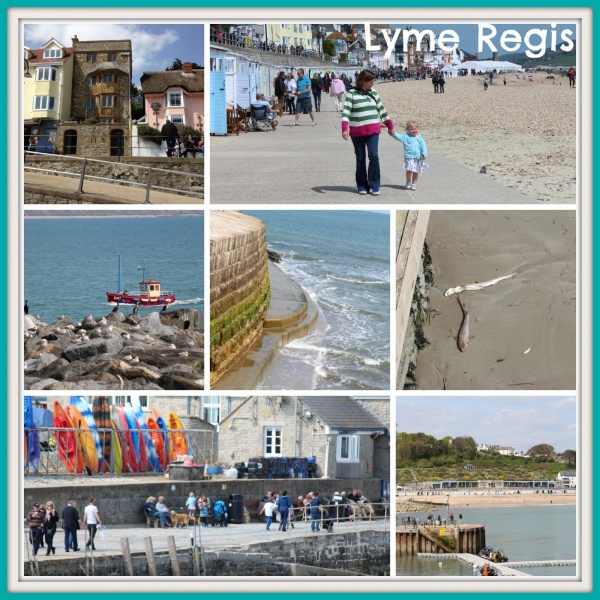 They were fascinated by the harbour, as the tide had gone out and left some dogfish stranded on the sand. 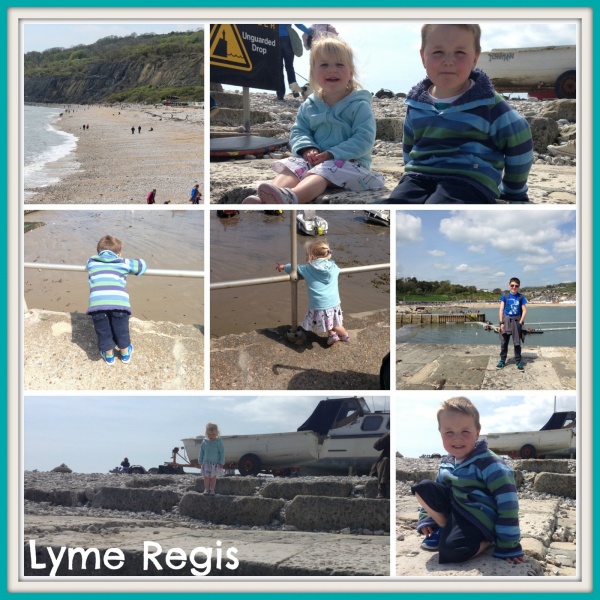 We then headed back towards the Fossil Festival, stopping for the obligatory ice cream on the way. 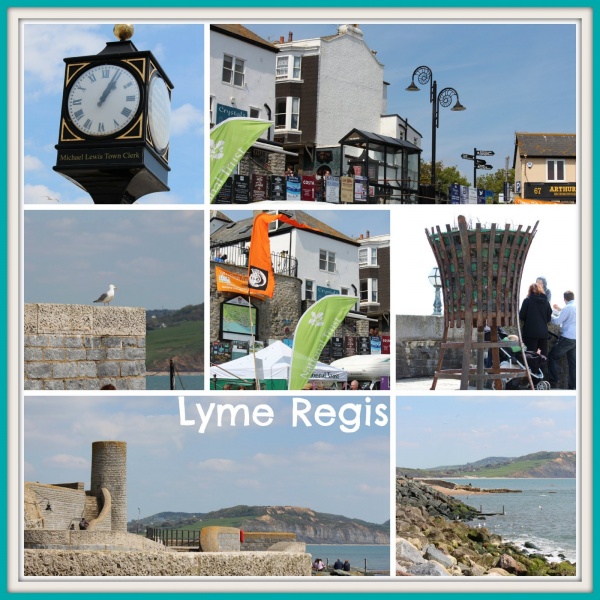 We walked back through the tent, stopping to look at things we had missed before, before heading to see the show inside Horace the Pliosaur.  Audiences are invited to get Horace ready for the day, brush his teeth and polish his flippers, before entering his belly on a cinematic journey with the Great Professor Humphrieson.

Travelling through Horace’s intestines, audiences handle a squishy eyeball and learn about the terrors of the Jurassic world, before becoming entangled in a frantic rescue mission! It is highly interactive and great fun, although Eliza wasn’t sure about getting in its tummy! 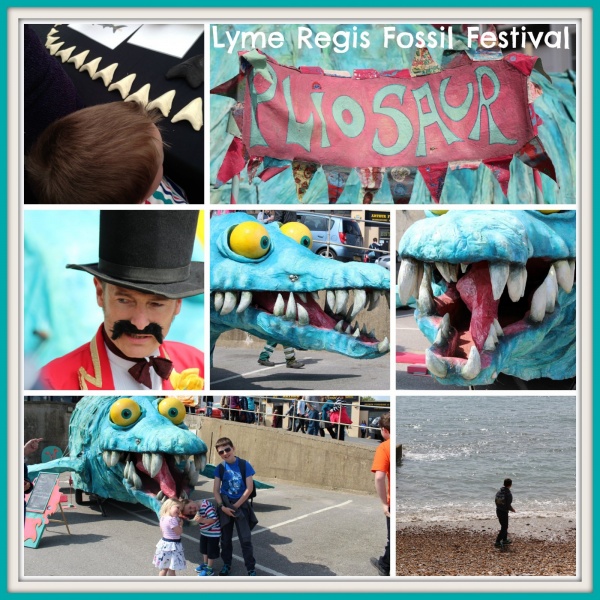 Meanwhile Kian enjoyed skimming some stones before we headed back to the car through the picturesque town. 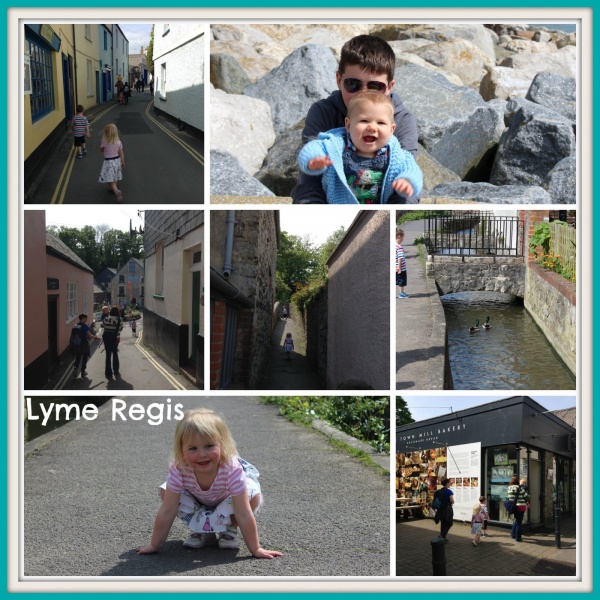 Thank you for a great day Lyme Regis, we will be back soon!