When I was invited to attend a preview event at Warner Bros. Studio Tour London – The Making of Harry Potter, I could barely contain my excitement.  I have adored the Harry Potter series of books since I discovered them with my daughter 12 years ago and now my 11 year old is discovering the brilliance of the series.

When each and every Harry Potter film was released, I was always one of the first to see them at the cinema and whilst I bemoaned the fact the film missed certain pieces from the books out, you could not deny their brilliance and you were guaranteed to be transported to the magical world of Hogwarts and beyond.

As with any day out with children, we packed the essentials, loaded them into the car and set off.  The directions were easy – Junction 19 off the M25.  In fact you can’t miss it if you try as it is signposted very well!

There is plenty of parking too, which is well laid out with good sized parking spaces.  We also spotted two buses emblazoned with Harry Potter images which will transport visitors to and from the station if you choose to travel by train. 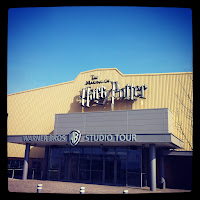 In front of the buildings we were greeted by three of the chess pieces from Harry Potter and the Philosophers Stone, giving us the first photo opportunity of the day, after which we ventured inside.

The lobby was huge and surrounded by huge pictures of the stars of the films as well as some props, which really added to the excitement.  To the left was a good sized cafe, Starbucks and the toilets and to the right was a good sized information desk and somewhere to leave your coats!  Genius idea!

All tickets MUST be pre-booked by visiting http://www.wbstudiotour.co.uk/ or through an approved tour operator as no tickets will be available to buy at the attraction.  Visitors are booked into 30 minute time slots throughout the day to ensure the flow of people is regulated, meaning a more enjoyable visit for all.  This is a wonderful idea – we queued for around 10 minutes before our tour started, but were treated to hand impressions of the main stars, and a view of the cupboard under the stairs in Privet Drive where Harry spent much of his early life.  The boys were also given a passport, containing fun facts, a find the Golden Snitch challenge and stamps to collect.

Once we were ushered into the first room, we were given a brief run down of the tour by one of the guides and shown a short film about how the books were discovered.  Next we went into a cinema room and got to see a show reel of some of the best moments from the films, with interviews from Daniel Radcliff, Emma Watson and Rupert Grint.  I am not going to spoil it by telling you what happens next, only to say it was one of the highlights of our day!

The first port of call was the Great Hall.  We were told some fascinating facts by the tour guide and then left to explore and take photographs.  There really is just so much to see!  Beyond the hall we were able to explore at our own pace, with lots of interactive stations, TV screens and staff dotted about the place to answer any questions. 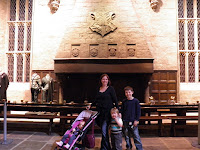 I was surprised to learn that all the props, sets and costumes are authentic and were created and used in the Harry Potter series.  You can see the Gryffindor dorm, common room, Dumbledor’s Office, Hagrids House and so much more.  The studio tour also reveals the secrets of film making and gives a “behind-the-scenes” look at the creative process of the production.  It is fascinating for children and adults alike and my 11 year old was sat transfixed watching a film of how they did the special effects.  I was worried the little ones may be bored but they thoroughly enjoyed it too as there is so much to see.

There is also a chance to “fly” in the Weasley’s Ford Anglia and on a broomstick, using green screen technology.  You get to see yourself flying over countryside, through London and over Hogwarts.  Sadly you cannot buy the video, but you can buy photographs of your adventure.  One photograph costs £12, but if there is a number of you (or you want every photo) the price is staggered up to £20 for 4 photo’s.

After the flying experience, we proceeded through the ministry of magic to a partially covered outside area.  There is a refreshment van, serving tea, coffee, snacks and Butterbeer!!  (The only place outside America that you can buy Butterbeer).  Beware of giving too much to the kids though as it’s full of sugar but utterly delicious!  There is also a chance to take your own photographs aboard the Night Bus, the Weasley’s Ford Anglia, Hagrids Bike and outside Harry’s house in Privet Drive. 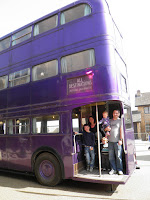 The next stage of the tour is the special make up effects.  Beware of some very scary looking creatures, which I thought may upset the little ones, but they were completely unfazed by it all.  There is a lovely film featuring Warwick Davies who talks you through the make up process too. 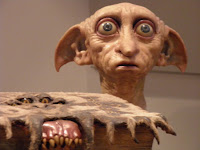 Just around the next corner is Diagon Alley – another highlight and a great picture opportunity! The attention to detail is astonishing and we all got a little bit excited to see Gringots and Olivanders. 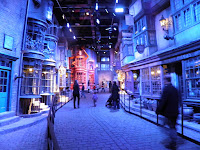 Coming out of Diagon Alley we were shown models, diagrams and artists impressions of how everything was designed.  There was some truly stunning artwork on display, but nothing prepared me for what was next……………..Hogwarts itself.  I turned a corner and there it was, bathed in moonlight with lights twinkling in the windows.  I have to admit I had goosebumps!  The lights gradually change to take you through to daylight and back again, so you can see Hogwarts in all its glory.  There were more interactive screens around the outside which showed you how it was built and how they used a green screen to get the actors to appear “in and around” the building. 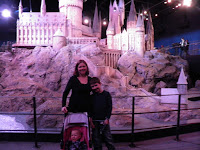 Next stop was Olivanders (my tip is to read as many wand boxes as you can and discover a secret or cheat and ask assistant) and lastly to the shop, which sells Harry Potter themed lines which are mainly exclusive to the UK and include pocket money items as well as collectibles.  There was also another photo opportunity to have a picture put on a wanted poster – this we had to do!!
So what does it cost?
Tickets cost £28 for adults, £21 for children (over 4 years) and a family ticket is £83 so it is not a cheap family day out.  The pictures are a fabulous addition to the tour and are a great keepsake, so you will need to factor those in too.  We avoided spending money in the shop by getting the pictures instead, so spent £40 on extras, but you could end up spending a small fortune as there were so many wonderful trinkets, costumes and collectibles to snap up.
Food and drink is reasonable, although a small cup of Butterbeer is £2.95 (we shared ours), but with the average tour lasting around 3 hours, you can get away with not needing to eat if you don’t want to.  There are plenty of toilet facilities throughout the tour and baby changing can be found in the disabled toilets.  This is a walking attraction and it is all level so is perfect for prams, pushchairs and wheelchairs, with plenty of places to sit down and have a rest if need be.
So, was it worth it?
YES, YES, YES! – It is a great day out for all the family, especially older children and teens!  Every single member of staff we spoke to was friendly, easy to talk to and really knew their stuff.
My only disappointment is that I wanted to try on the Sorting Hat to discover which house I was in!
You can also find Warner Brothers Studio Tour on facebook or follow them on twitter for more news and special offers!
This brand new attraction officially opens to visitors on 31st March 2012.